Considered one of the most pedestrian-friendly neighborhoods of St. Louis, the Central West boundaries are Union Boulevard and the eastern portion of Forest Park on the west, I-64/US 40 on the south, Delmar Boulevard on the north, and Vandeventer Avenue on the east. 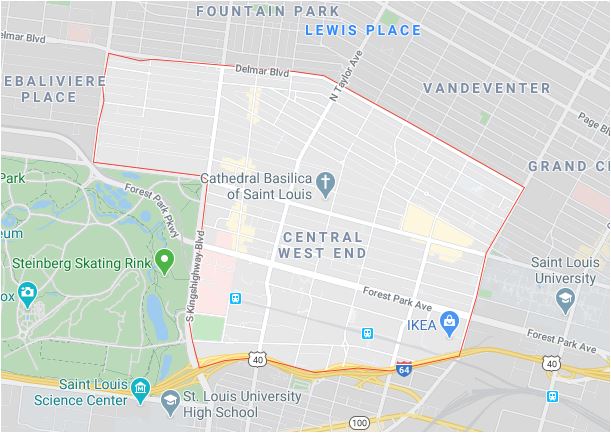 The Central West End’s main commercial district runs along Euclid Avenue and stretches from Forest Park Parkway on the south to Delmar Boulevard on the north. Many new residential and commercial developments have appeared along Euclid Avenue in recent years, and the building boom shows no signs of slowing down. These modern developments mix with grand, turn of the 20th-century homes and multi-family residences, to create a unique atmosphere in the neighborhood – which first grew in popularity during the coming of the 1904 World’s Fair, held in the adjacent Forest Park. Some residential areas of the Central West End are included in the National Register of Historic Places.

Dining in the central west end

The Central West End has over 34 restaurants and bars and offers countless options for dining al fresco. One of the more popular spots for brunch is Bowood by Niche located within the Bowood Farms urban garden center. Diners can enjoy breakfast, lunch, or dinner with a relaxing view of the garden courtyard or sit outside among the plants. It provides the quintessential neighborhood vibe. Acclaimed restaurateur Gerard Craft offers diners a French sidewalk bistro experience at  Brasserie by Niche. Newcomer Yellowbelly is an airy, modern gastropub with a tropical vibe dishing out island-inspired seafood & craft cocktails. Vicia, in the Cortex District of the CWE offers vegetable-forward, farmer-driven cuisine crafted by James Beard nominee, chef Michael Gallina.  In the summertime, the lines are long but quick-moving at Jeni’s Ice Cream. There are dozens of casual eateries and pubs. Find more restaurants on the Central West End website.

CULTURE in the central west end 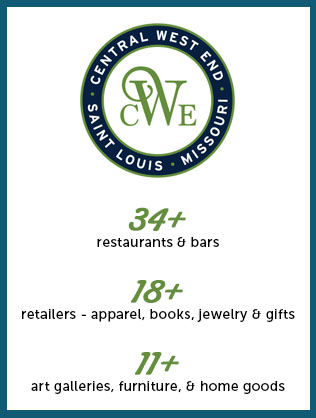 The Central West End is home to several art galleries including Philip Slein, Atrium, and Houska, whose owner, Charles Houska, has pop art murals you may spot in the area.  Neighborhood gems include Left Bank Books, the oldest and largest independently-owned bookstore in St. Louis. They produce over 300 events a year, most free. If film is your thing, Chase Park Plaza Cinema features the biggest blockbusters to the most talked-about independent films. Gaslight Theater, is home to the St. Louis Actors’ Studio and features live music and comedy. The Schlafly branch of the public library is conveniently located at the corner of Euclid and Lindell.

Bringing new businesses and activity to the area is Cortex, billed as mid-America’s premier innovation hub for tech and bioscience research, development and commercialization. Barnes-Jewish Hospital, Children’s Hospital, and St. Louis College of Pharmacy are all within the Central West End, making it a healthcare hub.

The Central West End is just north of Highway 64, so hopping on the highway to commute east or west is a breeze. Forest Park Parkway makes a commute to Washington University only ten minutes or to Clayton less than 15. The airport is about 25 minutes away.  The Metrolink runs east/west through the CWE, making public transportation a very viable option. A $13 million investment in a new Metrolink hub at Cortex was recently completed.

Demographics for the Central West End

And as always, if you want to explore living in this neighborhood, contact us. We are your local experts and can help answer questions and tour the are together.